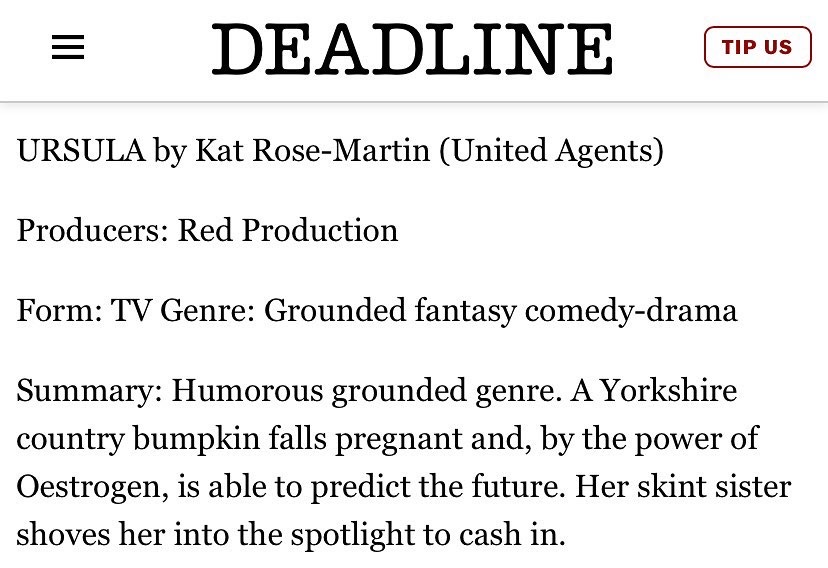 A script developed by StudioCanal’s Red Production Company has made it on to this year’s Brit List, the industry showcase for the best unproduced scripts by UK writing talent over the last year.
Written by rising screenwriter Kat Rose-Martin, Ursula tells the story of a Yorkshire country bumpkin who falls pregnant and, by the power of hormone imbalance, is suddenly able to predict the future. Her skint sister, seeing the potential for exploitation, shoves her into the spotlight to cash in on these new powers of foresight.
The Manchester-based indie has worked closely with Rose-Martin over the last six months to craft and shape her original idea and will be taking the script out to market in the coming weeks.
Sarah Doole, CEO RED Productions says: “Kat is one of the brightest rising stars in the industry firmament, with a writing voice that is unique and relatable and most definitely Northern. We immediately fell in love with her initial idea and couldn’t wait to work with her to flesh this out into the script that we’ll be taking out to commissioners shortly. That this effort has resulted in an entry on The Brit List is the icing on the cake.”
Kat Rose-Martin added “Developing Ursula with Red has been an absolute joy. They’ve supported my vision from day dot. Telling me I could ‘go as far as I wanted’. Letting my ADHD brain do its thing with their guidance has been truly liberating and then for it to make the Brit List – I’m chuffed to bits. I hope everyone falls in love with these chaotic sassy sisters as much as we have.”
Born and based in Bradford, Rose-Martin is a writer/actor and inaugural winner of the Kay Mellor Fellowship. She has written extensively for theatre with credits including Aphra Behn (Shakespeare’s Globe); Jane Hair (Bronte Society); Children of War (Sheffield Theatres); and Cheap as Chips (Leeds Playhouse). In 2020 she was selected to be part of the BBC Writersroom Northern Voices and a year later won a place on the Sky Comedy Rep project. Her TV drama The Crossleys made the BAFTA Rocliffe TV Drama Top 10 and is now in development in the US. Later this year, Rose-Martin will receive her first broadcast credit for a Christmas episode of Holby City.
Ursula is one of several projects currently in development with Red as part of the independent producer’s commitment to showcase diverse and underrepresented voices. The team is also developing a series with disabled queer writer and actor Jamie Hale, as well as Amy Guyler who topped last year’s Brit List.